The structure of polymer lithium battery is divided into: 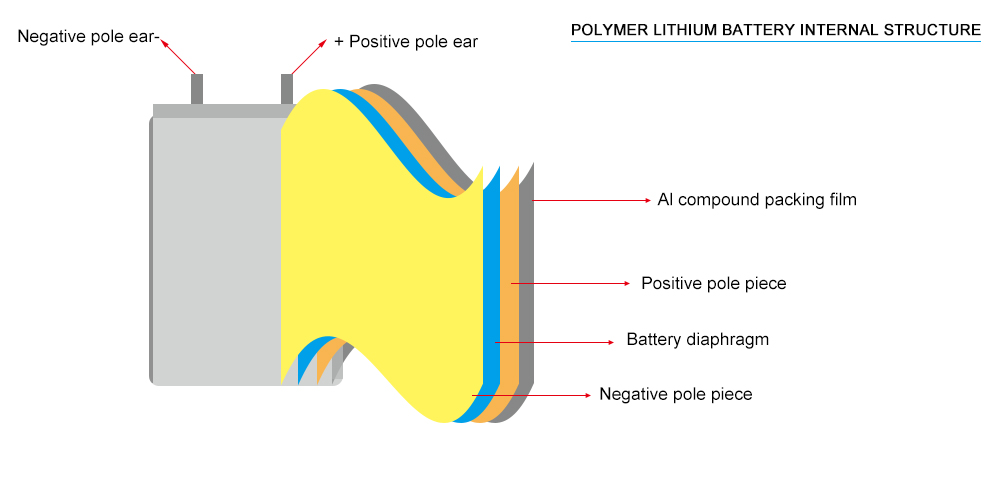 Part 2: The working principle of each part of the lithium battery

1. Positive pole piece: Coating the positive electrode material on the aluminum foil, and then stamping and forming.

2. Negative pole piece: The negative electrode material is coated on the copper foil, and then stamped and formed.

3. Welding electrode ears for lithium batteries: The main function of the lug is to transfer the electrical energy of the internal positive and negative poles to the external circuit. The tabs of the polymer battery are made of aluminum tape for the positive pole and nickel tape for the negative pole. Considering the sealing with the aluminum-plastic packaging film, there is a layer of tab glue on the tabs of the seal. At the same time, since the anode aluminum strip is easy to break, special attention should be paid to protection during processing, transportation, storage, and use.

In order to ensure the sealing effect, the material of the tab glue is basically the same as that of the inner layer of the packaging film, mainly PE substances.

4. Separator: It is placed between the positive pole piece and the negative pole piece. The function of the separator is to separate the positive and negative poles of the battery to prevent the two poles from being directly short-circuited. The diaphragm itself does not conduct electricity, but electrolyte ions can pass through.

5.battery solution : The electrolyte acts as a carrier of energy transfer in the battery. The voltage of lithium-ion batteries is as high as 3~4.2V. Therefore, only organic solvents can be used as electrolytes, and aqueous electrolytes cannot be used (the decomposition voltage of water is 1.23V).